Update: Check out my improved setup: My Free iPhone Setup with FreedomPop.

I have a perennial conflict between wanting geeky toys and saving money. Usually those two things are mutually exclusive but sometimes I am able to have both.

The iPhone is a perfect example of this. I’ve had an iPhone for 2 years and love it. I got it for my birthday so I didn’t have to talk myself into the expensive data plan but after having it for a few weeks I decided the cost was worth it because it is such a useful (and cool) device.

After my wife’s iPhone got stolen and I gave her mine to use I started thinking about alternatives to paying AT&T an arm and a leg for their plan. I had read a few articles over the years in passing about using an iPod Touch as a free iPhone but didn’t ever seriously consider it. However, since I was without a phone and not wanting to renew my contract for 2 years (i.e. spend over $2,000), I decided to give the iPod Touch setup a try.

I did a bunch of reading of blogs about how others accomplished this and decided it was feasible.  Everyone that I found had a slightly different configuration but they all seemed to be happy with the end result.

The major pieces to my setup are:

The basic idea is that I have a Google Voice number as my main phone number.  When calls come in to that number, I have 4 different physical devices  (“forwarding  phones”) setup to take the call.  Depending upon where I am and whether I have access to WiFi, I will hear the call come in on one of these devices.  When I am at work, my work phone will ring.  When I am at home, my iPod touch will ring, when I am out and about, my wife’s iPhone will ring, and when I am in my car, my prepaid cell phone will ring.  There are very few scenarios with this setup that I am “unreachable”.  Also, outgoing calls can be made from any of these devices. 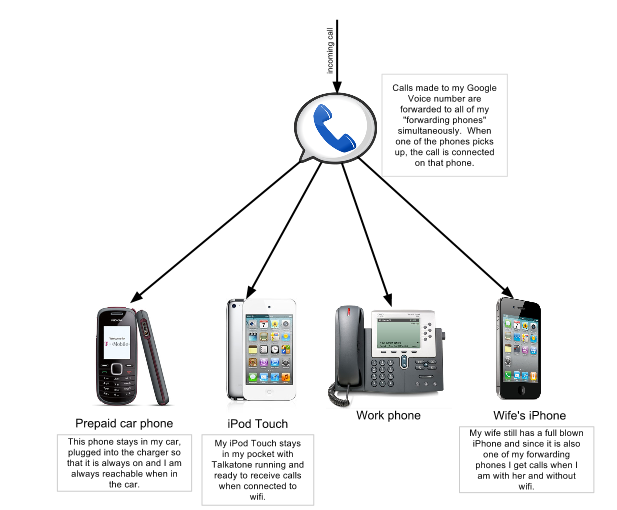 This part is easy.  I just went online to Amazon and bought an iPod Touch.  It cost me $200 but I could have easily gotten a used for for much less.  Since the iPod Touch isn’t technically a phone you’ll need to use the speakerphone, ear-buds, or a bluetooth headset to make calls.  I use the earbuds when they are handy and the speakerphone at other times.  It works fine this way.  I have been thinking about getting a bluetooth headset, though.

This part is easy too.  I just went and signed up for a free Google Voice account and got a phone number assigned to me.  Then, I simply added my 4 forwarding numbers and configured some options to my liking.  One of the nice options here is the ability to specify Ring Schedules**.  **Since my wife’s iPhone is one of my forwarding phones and I don’t want her to get unwanted calls (“Honey!  I keep getting calls for you!!”) during business hours when I am at the office, I was easily able to specify that this phone was disabled as a forwarding phone 8-5, M-F.

Talkatone is an awesome iOS app that leverages Google Voice to give your iPod Touch inbound and outbound calling functionality over WiFi.  You simply download the free app from the App Store and then give it your Google Voice account information when fire it up for the first time.  It runs in the background and has many options so you can fine tune it to your liking.  I was honestly skeptical about this app at first and thought it might not be reliable but I have continually been impressed with it.  Once this app is running and you are connected to WiFi, incoming calls to your Google Voice number will magically ring on the iPod Touch and you will be given the option to accept them.  The app is able to handle intermittent Wifi connectivity so when you go from no Wifi to having Wifi connectivity, it will start listening for calls again.  That feature right there is killer.  It means I can build my list of known Wifi hotspots and the iPod Touch will atomically jump on hotspots and start listening for calls, all without me having to touch it.  Talkatone also supports free texting through Google Voice so add that to it’s awesomeness.

Prepaid Cell Phone (for the car)

This part of my setup is technically not necessary but a very nice to have.  It keeps me reachable and enables me to get a favorable WAF.  Also, it’s important because having a phone in the car can be necessary in an emergency.  I decided to go with T-Mobile’s pay-as-you-go prepaid plan and bought a cheap $10 old-school Nokia phone and loaded it with $50 in credit.  Since it is pay-as-you-go, the cost per minute is high but I don’t intend on using this phone often.  I estimated that I would spend less than $5 a month with this phone.  It is mainly for calls from my wife on the way home (“don’t forget the milk from the store on the way home!”), emergencies, and convenience for those miscellaneous calls that need to be made from the car from time to time.  Once I bought the phone, I just plugged it into the car charger, put it in the arm rest compartment and it stays there.  It’s always hooked up to the charger so it charges when the car is on and since the battery lasts so long, it never dies between the times the car running and charging it.  I simply went into the Google Voice settings and set this phone up as a forwarding phone and it was good to go.

Adding Up the Costs

3 month break-even!  Not bad.  After that break-even period, the savings goes straight in my pocket.  Actually, if I had gotten another iPhone on contract (to replace the stolen one) I would have ended up spending $200 on it anyway so I could argue my marginal out of pocket cost for the “free” setup is much less (~ $60).

I’ve had this setup for a couple of months now and can honestly say it is working well.  I am reachable, able to make calls almost everywhere I am, and am saving bookoos of $.  I basically get an iPhone setup for practically free.

Yes, it is not “as good” as a full blown iPhone setup, however and for the following reasons:

That’s it.  I’m loving my Free iPhone setup and the $ I am saving!