I’ve been getting more and more into Vue.js lately because it’s awesome and feels good. Plus, it’s not React so using it seems counter-culture and edgy, FTW. Also, Vue has improved TypeScript support and I’ve been checking that out. Oh, and I keep hearing about this new CSS framework called Bulma that I want to play around with. What is a developer to do with all these things swirling around in their head? Build a template, of course.

Well, I’m back to making templates again. I don’t know why but it seems to be my thing lately. The last Vue.js template I worked on was full stack and included PostgreSQL, authentication, and bunch of other cool stuff. This time, I wanted to make it simple. Just a simple scaffold template using Vue.js that would be a nice starter for the next project I decide to tackle.

So, vue-typescript-bulma-template is what I came up with. I’m good at naming things, right? If you look at the page output you’d think there isn’t much to this thing: 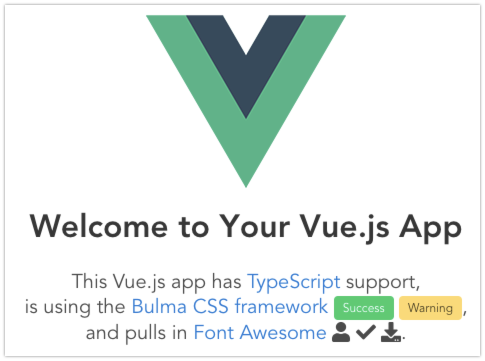 But actually, there is quite a lot of nice stuff built in:

Go check it out and build something neat!