Moving from Raspberry Pi to ODROID-N2+ for Home Assistant

I have been having a lot of fun playing with Home Assistant (HA) as part of getting my new house setup with smart automation. I recently switched from using a Raspberry Pi 4 to an ODRIOD-N2+ because I was having stability issues.

I first installed HA on a Raspberry Pi 4, using a cheap SD Card from Micro Center. It wasn’t long before the SD card failed and I learned about how write heavy HA is and the need to use a high quality SD Card or SSD. I switched over to a SSD and things got better. But, once I upgraded past Home Assistant OS 5.2 my system become unstable and would freeze up weekly and sometimes only 24 hours after a reboot. But, I was fairly invested in using it and determined to figure out the cause. I tried all sorts of things and following a GitHub issue tracking the problem. Unfortunately the problem is still occurring (as of the date of this post) and seems to be specific to Raspberry Pi usage.

Looking for advice on the Home Assistant Community forum about the best HA setup, I decided to ditch my Raspberry Pi setup and go with an ODROID-N2+. This is the same computer used in the Home Assistant Blue system, which is an all-in-one hardware and software package sold by the company behind HA. I didn’t want to spend the money but decided it would be worth it to have a solid, stable setup. I placed my order on ameriDroid and it included the following: 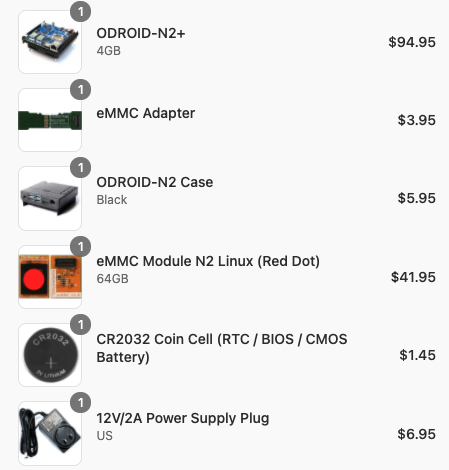 I installed Home Assistant OS on the eMMC card and booted it up. I then restored a snapshot from my Raspberry Pi based system and to my relief, everything came right up. It restored everything, as if I was still using my old system. The HA snapshot backup / restore feature is really quite impressive and very useful. In fact, it even recognized and configured my GoControl CECOMINOD016164 HUSBZB-1 USB Hub (used for Z-Wave and Zigbee) without me having to change anything. Wow, I was impressed.

I plugged everything in and mounted it in my tech closet:

The system has been running for over a month with no issues. I am very glad I decided to switch over to the ODRIOD.