Last year, an issue was opened on my cron-expression-descriptor project asking about support for .NET Core. It took me a year to finally get it done (mostly because of laziness) and I would like to share the process of porting it.

Searching around for “how to port a .NET Framework library to .NET Core” turned up some results but most of the articles were long and I didn’t really understand the big picture of the process. I didn’t understand, for example, what the end result would be. I had questions like:

You can see some of this confusion in one of the comments I posted on the issue. Most of the articles didn’t address these questions, at least not the ones I referenced. I saw lots of things about running the The .NET Portability Analyzer to see what things would need to be changed to enable a library to on on .NET Core and the process of switching out unsupported features with alternatives.

So, I started with the The .NET Portability Analyzer and found that I was in fairly good shape, mostly thanks to the fact that Cron Expression Descriptor doesn’t have any external depedencies. There were minor things like ToTitleCase that wouldn’t work on .NET Core but the big on was the absense of System.Threading.Thread.CurrentCulture. This was being used to determine the i18n setting to use at runtime, which affects the language of the output. Ok, I realized I’m probably going to need to rip most of that out and just allow the culture settings to be specified as runtime options. 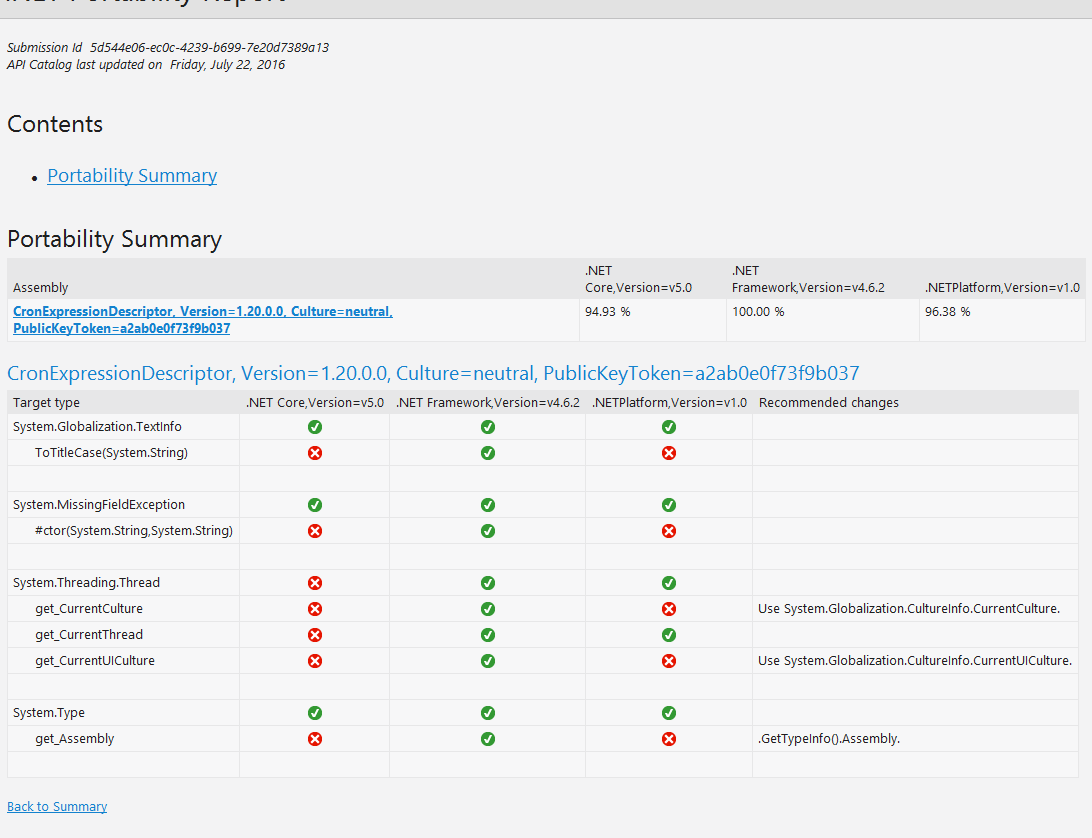 I opened a Pull Request with the intial work to get the Portability Analyzer happy and green. And then, I did nothing for a year. A full year I let this PR sit around. Why? I lost some momentium of interest but I also bumped into my original questions and still didn’t know the answers. I thought, “Ok, I’ve got the Portability Analyzer” happy but now what”? My library is .NET Core compatiable but what about all the other stuff? Do I need to just install .NET Core, change some values in the .csproj, build it and then ship it? How do I know it will continue to work on earlier .NET Framework versions like 3.5?

Fortunately, in the year that had past, things got better. The articles online were better and most importantly, .NET Standard was announced. This was really the missing piece that made things much clearer for me. “Oh! Ok, so I can just tell my library to target .NET Standard, build it, and then it will run on any platform that supports the .NET Standard version I targeted. That makes sense.”. Now, I was starting to understand the big picture.

Eventually, I installed Visual Studio Community 2017, which had tooling for .NET Standard, and created a brand new C# library project using the .NET Core starter templates. I wrote up a quick “Hello World” .NET Standard library and then referenced it from a .NET Framework console app. Once I got this working, I knew I was moving in the right direction. I then created a .NET Core console app (from the starter templates of course) and referenced that same library and confirmed it worked. Cool, so now I’ve got a .NET Standard library that can be consumed from a .NET Framework and .NET Core application.

I opened on the .csproj for my “Hello World” .NET Standard library to see where the magic was. To my surprise, it was super simple. Much more condenced than what I am used to seeing in a .csproj file. I figured out what I need to change in the CronExpressionDescriptor.csproj project file and ended up with this. 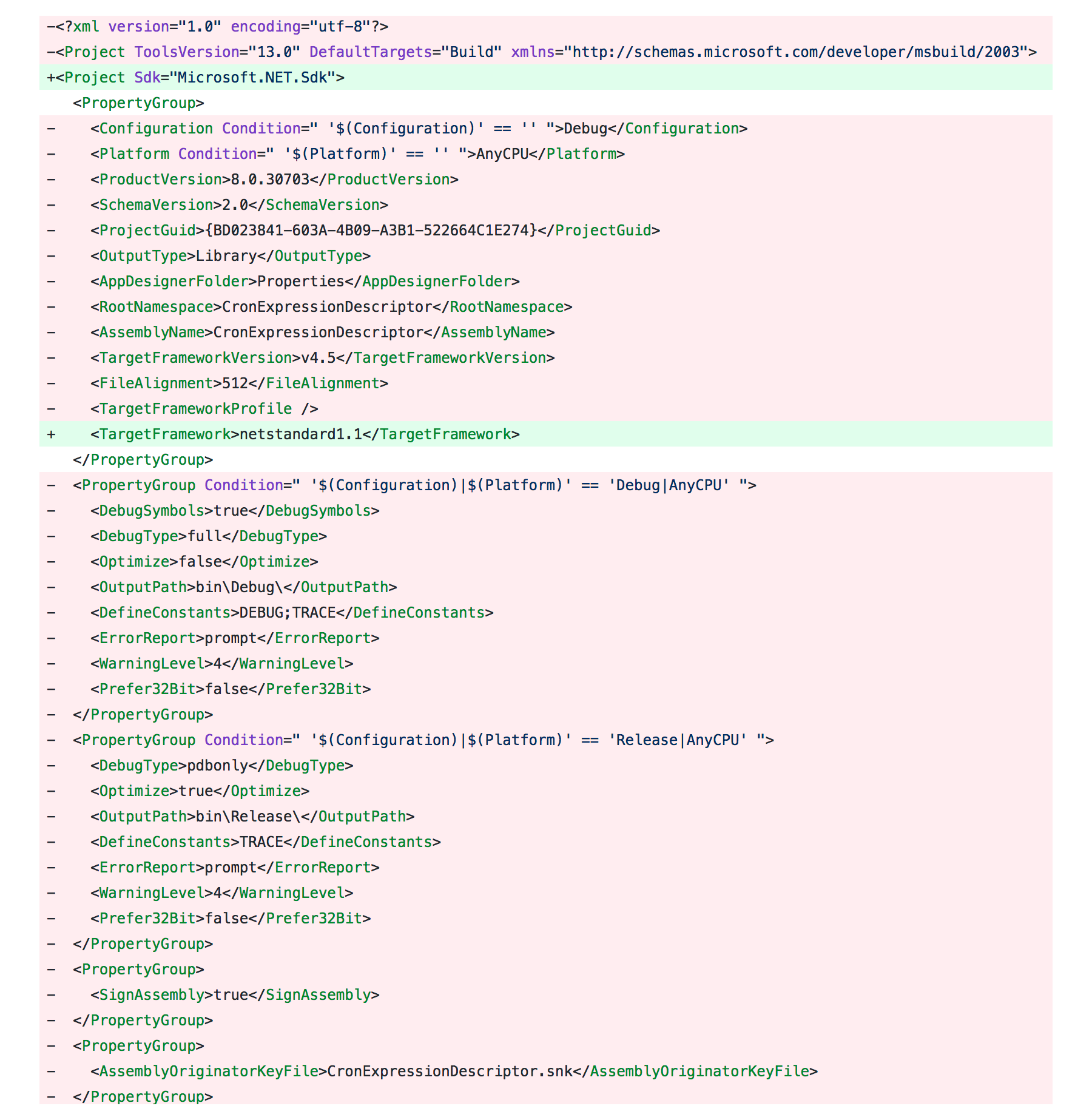 The above screenshot isn’t even the entire diff. It’s twice as long as that. Crazy! Some of the key chages were:

Once I made the changes and the library built, I knew it was smooth sailing from here. I just needed to build it, package it and push it up to NuGet. As I was doing this, I ran into some issues with getting NUnit tests to work and eventually swapped out NUnit for xUnit which has better .NET Core / .NET Standard support.

Moving to VSCode on macOS

I’ve used macOS as my primary OS for a several years now and am quite comfortable there. I feel right at home using VSCode and only booting my Windows 10 VitualBox machine when I have to. This includes when I need to do work on Cron Expression Descriptor. I wanted to move over completely to macOS for development moving forward. So, after some fiddling and Googling, I got everything (build, tests, publishing to NuGet) running on from macOS. This was huge! .NET is truly cross-platform! Now, moving forward, I never have to boot my Windows 10 box to work on this library. In the commit history you’ll see commits related to this switch, namely VSCode tasks setup.

If you look at my RELEASING.md doc, you’ll see that as long as you have .NET Core SDK installed (on Windows or macOS or Linux) and bash (via Linux Subsystem on Windows), you can run ./build/release.sh to run the tests, build the assembly and push up a new package to NuGet.

At the beginning of this process, I didn’t understand the big picture. Now I do, obviously. The big picutre with porting a .NET Framework library to .NET Core is this: