About a year ago, a friend at work sent me a link about something called a PogoPlug.* 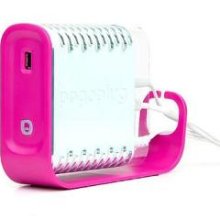 It’s a “plug computer” which is an extremely small full blown computer running a Marvell Sheeva 1.2Ghz processor. It’s got 256MB of memory and has 4 USB slots. The PogoPlug is sold as a “media sharing” device and has the Cloud Engine’s (vendor) own software running on it allowing you to easily access photos, music, videos, etc. from other locations and from your mobile device. At first glance I thought it was ugly (pink?!) but pretty cool because it was so small. I saw one at MicroCenter one day and decided to try it out. It was only about $75 bucks. Boy am I glad I did! This thing has turned out to be one of my favorite geek toys.

After playing with it for awhile, I found some websites talking about how to get full blown Linux running on the thing. This was cool because you could have a silent, tiny, “always on” server running with 4 watts of power in you closet. The possibilities were many. The wheels in my brains were spinning full speed ahead.

I got Arch Linux ARM running on it and setup the following on it:

Want one too? Here’s some places to get one.